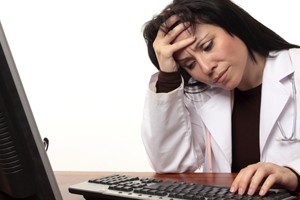 Though transitioning to EHRs boasts substantial benefits for chiropractors and other medical professionals across the country, including streamlined workflow, government incentives and a more favorable balance between administrative duties and clinical hours, adhering to the strict requirements set forth by meaningful use has proven a challenge for those without the best chiropractic EHR software.

In fact, the American Academy of Family Physicians (AAFP) recently reported that, while 2012 saw a staggering 180 percent increase in "first time meaningful users" from the previous year, it also suffered a drop in retention rates.

Two analysts from the AAFP's center for Health IT—Drs. Jason Mitchell and Steven Waldren—reviewed data from a report released by the Centers for Medicare & Medicaid Services and concluded that the drop rate for all medical professionals came to 20 percent.

With the stricter requirements of meaningful use stage 2 poised to take effect in the near future, these figures are particularly concerning. Mitchell and Waldren sought to shed light on what may be the driving force behind the documented decline in retention, citing the year-long reporting period and uncertainty regarding attestation deadlines as two possibilities.

"For some physicians, the issue likely was a lack of ongoing monitoring of their meaningful use numbers throughout that entire year," Mitchell explained in an interview with AAFP.

Furthermore, Mitchell cited the fact that many physicians who became meaningful users in 2011 benefited from the ongoing support of regional extension center programs that were funded by the federal government. These organizations, Mitchell explained, were intended to assist new adoptees with the implementation of EHRs and provide guidance regarding meaningful use. Mitchell noted that a lack of financial backing and sufficient incentives may account for the diminished presence of these programs as family physicians entered their second year of meaningful use.

How the best chiropractic EHR software can help

As well as remaining abreast of key meaningful use deadlines in 2013 and beyond, chiropractors may be able to overcome these reporting difficulties by utilizing on chiropractic management software that both adheres to the current and impending requirements and can be seamlessly integrated into their practice.

Ultimately, the practice of adopting EHRs is a means to improve efficiency, protect patient privacy and facilitate the distribution of vital information when necessary. But, to fully reap the benefits of this shift, it is essential to invest in chiropractic EHR software that is intuitive, comprehensive and reliable.