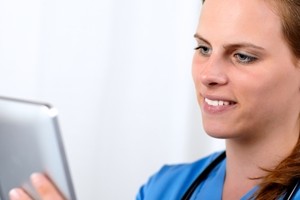 Farzad Mostashari spoke with the AAFP about getting the most out of EHRs.

Federal health officials behind the HITECH Act have stressed the forthcoming benefits of EHR adoption to skeptical physicians, noting that web based medical software is likely to result in a streamlined workflow and better patient care, ultimately cutting back on administrative and healthcare costs. Many doctors listened, but have become somewhat disillusioned as they now work to overcome some of the hurdles presented by implementing the new technology.

In order to address these concerns, the national coordinator for health information technology, Farzad Mostashari, M.D., spoke to the American Academy of Family Physicians about the productivity gains and return on investment that some EHR users are waiting to see.

Re-thinking workflow
Mostashari said that practices attempting to use their EHR systems much in the way they used paper systems may inevitably see little change in office productivity. Alternately, doctors and administrators who use their chiropractic EHRs to their fullest potential while keeping certain tasks on people are likely to see the greatest benefit.

"We know that successful implementation can be done, and is being done, by many excellent physicians who were able to – and I think this is the key – change their processes to take full advantage of their EHRs," Mostashari told the AAFP.

One example of ways practitioners can improve their workflow with web based medical software is by integrating sign-out notes in the system. According to a study conducted by researchers at Lucile Packard Children's Hospital in Palo Alto, California, doctors were able to easily adopt the new sign-out process, helping to increase the frequency with which they completed the procedure, from 37 percent to 81 percent. Additionally, participating physicians reported that this resulted in less time spent by staff on data entry, saving both time and administrative costs.

Now where's that return on investment?
This may be the biggest question of all among healthcare providers as they wait to see the money they spent on a shiny, new EHR system turn into more revenue for their practice. Mostashari said this once again depends on each individual practice and how they operate. For example, practitioners using a fee-for-service system may see benefits in providing better care and service, but may not necessarily receive extra monetary reimbursements.

"We've been an advocate for making sure that when value is added, it's reflected in increased physician reimbursement whether it's through the patient-centered medical home (PCMH) setting, value-based purchasing or part of an accountable care structure," Mostashari told the organization.

This past spring, Healthcare IT News reported on a Worcester, Massachusetts-based health system that invested $24 million into EHR technology. As a result, the organization reported that it increased revenue by $2 million a year – and that's just what they saw stemming from better Medicare compliance.

The health system's medical director and physician Larry Garber told the news source that the EHR system increased Medicare reimbursement rates because of how strict the public health insurer is about receiving proper documentation for diagnoses. If something's missed, a practice may not get their money. With the web based medical software, however, alerts and reminders help staff members in the process of creating and submitting documents to Medicare, ensuring that no steps are overlooked.